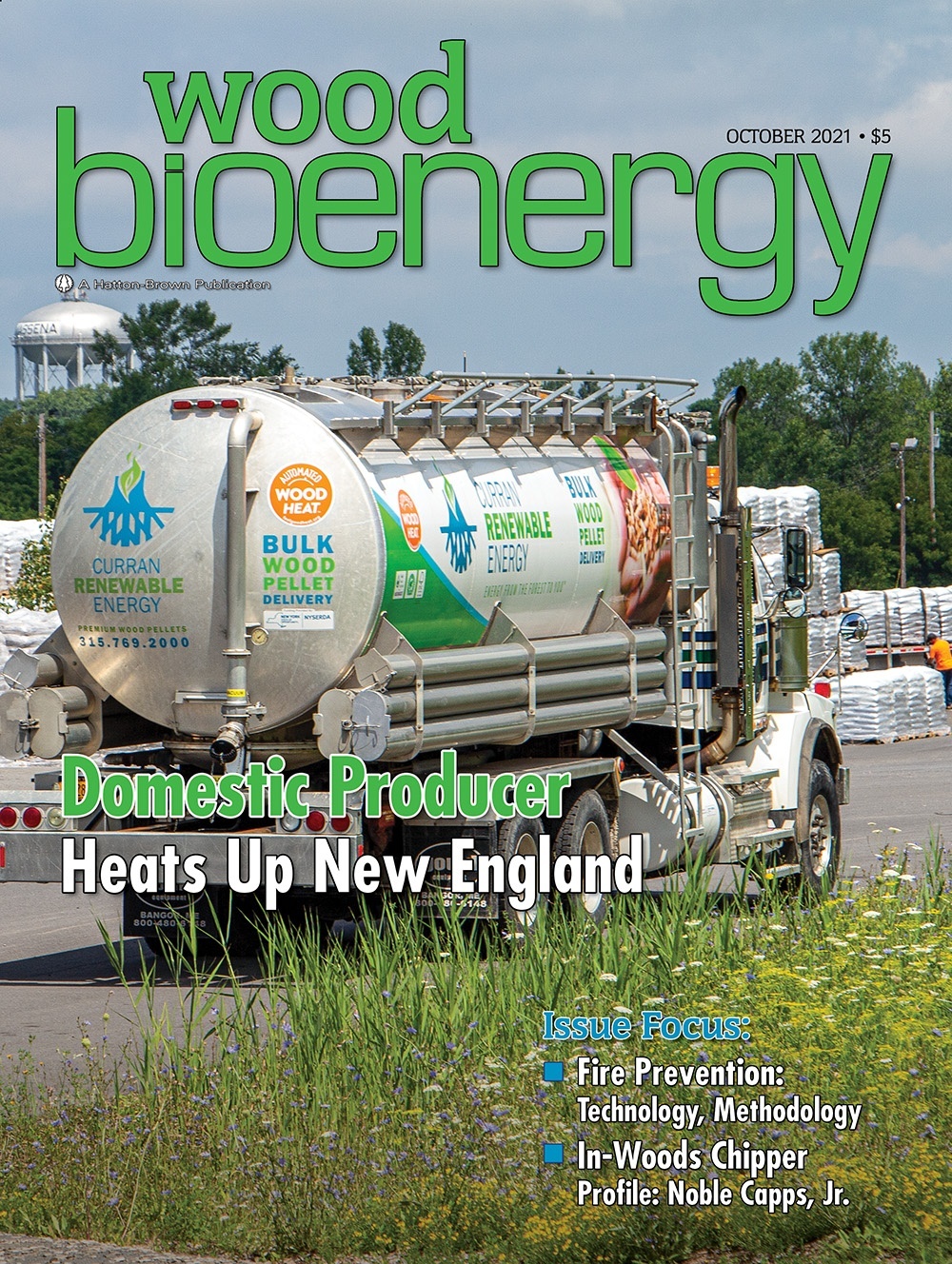 ZIRCONIA, NC – It was only a matter of time before 35-year logger Noble Capps Jr., 55, came back to what first distinguished his family’s reputation: whole tree chipping.

The year 2020 taught most of the world just how connected things are to each other. That one choice by one person in one corner of the world has a magnificent ripple effect on the entirety of us. Without getting too far down a rabbit hole of chaos theory, macroeconomics versus “woo woo” science, butterfly effect versus ripple effect, the fundamental truth that things are connected rings true at large—but especially in forest products. That connection is incredibly evident in this month’s cover story on New York-based Curran Renewable Energy.

The Curran family started out in business not to open an 80,000 ton bagged domestic pellet production facility. But, 10 years ago, after their large logging operation took hit after hit—shrinking the market to almost no outlets for their low value timber—they decided to solve their own problem. They built their own pellet mill. This kept their logging jobs rolling, they kept their people employed and they started something that, when COVID-19 dealt another hit to their log markets, kept their checkbooks healthy. Curran Logging, the name that started it all, first birthed Seaway Timber Harvesting and then came Curran Renewable Energy.

See, they fixed what so many have complained about on both sides of the table. They solved the problem for in-woods chipper operators: They gave themselves a guaranteed market for their chips. And they solved the problem the mills constantly battle: There is now consistently delivered raw materials. Their logging business went from surviving to thriving.

While the dots have always been connected, Enviva for example can’t make industrial pellets without inwoods operators like Noble Capps (also featured in this issue); Enviva doesn’t actually own Capps’ operation. Sure, a mill operating logging crews is not exactly reinventing the wheel, but what has perked up the antennae of our staff was the order in which the dots were connected in the case of Curran Renewable Energy. The mill doesn’t operate a logging crew out of necessity. The logging company, at least at first, operated the mill out of necessity.

As many of you know, Wood Bioenergy has many sister publications in the wood products business, and two of them are focused solely on the woods—the logging side of things.

As part of that logger focus, sister publication Timber Harvesting crowns a Logging Business Of The Year each year. For 2021, that business is, you guessed it, none other than Seaway Timber Harvesting, the Curran family’s logging arm. Each time the committee behind the Timber Harvesting Logging Business Of The Year award meets to discuss nominees the conversation defaults to their business acumen. And for this year’s winner, their business acumen is one of the brightest and strongest we’ve seen in many years. The Curran family joins a long list of logging families throughout the country who’ve won this award while remaining humble and remembering where they came from—and who helped them get there.

All three brothers, Pat, Lee and Tim, are involved in daily operations; each brother excels at a different aspect. Curran Renewable Energy is staffed by children of each of the brothers: Tim’s son Tim Jr. acts as night manager; Lee’s daughter Tricia is the office manager and Pat’s daughter Kelli is the marketing manager. Adding the layer of their children makes it mean just that much more for Curran Renewable Energy. We’re all connected, and that connection can help us go from simply surviving to thriving.

MASSENA, New York – Sometimes being in business means finding problems to solve. Other times it means solving problems that are already there. Over 30 years ago when the Curran brothers, Pat, Lee and Tim, started their logging business – aptly named Curran Logging – they thought they knew what to expect. Hard workers from basically birth, this bunch from upstate New York has never met a challenge they won’t push through. Remembering an incident from just this past winter, when a machine got stuck and froze into the earth, Pat and Tim were trying to get it out. Tim remembers Pat asking if he thought they were going to get it out. Without hesitation Tim said yes, he recalls, because there’s literally nothing the pair hasn’t been able to do when they work at it. 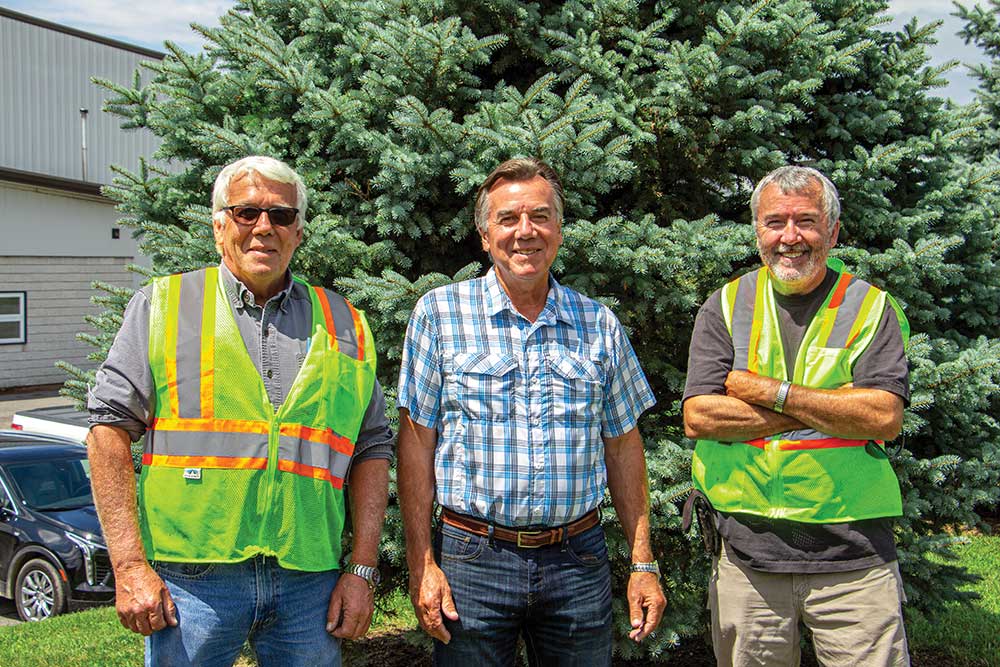 The Curran brothers, from left, Tim, Pat and Lee

“Our father taught us to never quit,” Tim says. “Both our parents, really, taught us to never quit.” That never quit attitude has served them well and is evident in their business. Curran Logging, which started it all, has since morphed from just the family to more than 85 employees. In addition to the family’s logging and chipping crews, the Curran brothers operate a fully automated bagged pellet plant, called Curran Renewable Energy, producing 80,000 tons.

Curran Renewable Energy wasn’t part of the plan 30 years ago, but now it is an integral part of the operation. How does a logging company get into plant operation though? Easy – the brothers saw a problem and they fixed it. Pat explains, “We would have never done this if we had a solid paper industry in our area. That’s how we built the forestry side in supporting the paper industry. As of today, we’re not delivering a single load to the paper industry, but that is primarily due to the current situation with COVID.”

Dr. Michael Lee Clutter, who served as Dean of the University of Georgia Warnell School of Forestry and Natural Resources from 2007-2015, and was a noted expert in his field, died on December 24. He was 63…