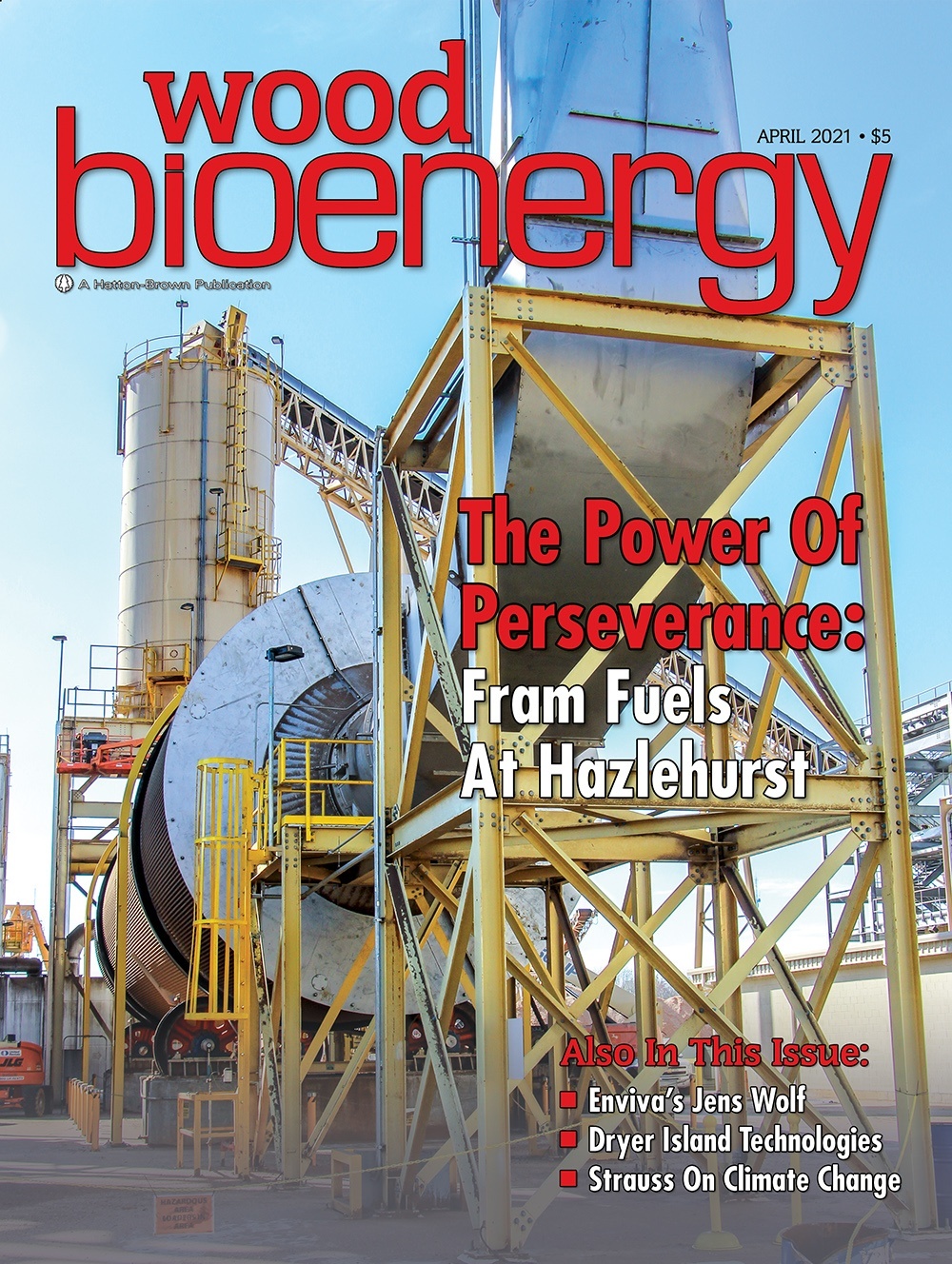 The Power Of Perseverance: Fram Fuels At Hazlehurst

Editor’s Note: Jens Wolf serves as Vice President and General Manager of Europe for Enviva, joining Enviva in January 2020. He is responsible for regulatory engagement and market development in the region, and for managing Enviva’s European team in York, Berlin and London. Wolf brings more than 20 years of experience in the power industry with more than a decade of focus on biomass-derived power and fuel sourcing. He joined Enviva from Drax Group where he was responsible for trading, fuel sourcing, logistics and new fuels development, ultimately serving as commercial director for almost four years.

Wolf agreed to answer several questions posed by the editors of Wood Bioenergy and can be read in the April 2021 issue.

Prior to the Trump administration, the U.S. had promulgated the Clean Power Plan (CPP). Essentially, CPP would have required states to achieve lower carbon emission goals in the power generation sector by 2030. This would have contributed to the U.S. commitments in the Paris Agreement. In aggregate, the U.S. would have reduced greenhouse gas (GHG) emissions produced by electricity generation by about 32% from 2005 levels by 2030.

From the Editors: The Good Old College Try

One can only try to imagine the challenges and complexities in tearing out a significant section of a new industrial wood pellet mill and replacing it with different equipment and technology, even of the more conventional kind.

Fram Renewable Fuels has made such a conversion at its Hazlehurst Wood Pellets facility in Hazlehurst, Georgia. It appears to have done so quite successfully, even increasing production capacity in the meanwhile. Thanks to Fram opening its doors to us, we were able to visit the plant in late 2016 and again this March, a span of more than four years, so we were able to gain some insight into this monumental transition, but it pales in comparison to living and breathing it on a daily basis.

We recall the high and sincere hopes the Fram President Harold Arnold had for this innovative technology back in 2016 as he led us through the new plant, which featured technology new to the wood pellet industry, a modular approach with three independent lines each with a close-coupled pre-dryer and main dryer configuration, which in addition to obviously drying the raw material was meant to utilize the heat value of the VOCs, while not requiring a conventional wet ESP and RTO. The modular setup would also have the advantage – actually very simple when you think about it – of flexibility in downtime, whether forced or scheduled maintenance, in that the whole plant wouldn’t have to go down.

But to paraphrase Robert Burns, “The best laid plans of mice and men often go awry.”

Today Arnold says everyone involved was extremely talented and gave their all in trying to make the plant run as envisioned.

In other words, no hard feelings, but time to move on. And there was never any doubt that the Hazlehurst operation would move on.

“The plant is needed as part of an overall plan for processing forest products in Hazlehurst,” Arnold explains. “Our partners own other forest product businesses here who benefit from having a local buyer of their residual products and of their lower quality timber. There was never any question about continuing with work on the plant until it functioned as originally planned.”

The plant shut down in late January 2019 and restarted in December 2020, and with 20% more production capacity.

Our article in the Wood Bioenergy April 2021 issue goes into more particulars on the Hazlehurst plant as it runs today. Harold Arnold, who is one of our favorite persons in this industry, and his team at Fram Renewable Fuels and Hazlehurst, including his son, Harold, deserve tremendous praise for not being afraid to venture into the unknown, overcoming a setback and emerging on the other side better than ever.

Continuing with the proverbs, with a nod to Shakespeare, “All’s well that ends well.”

Cover Story: The Power Of Perseverance: Fram Fuels At Hazlehurst

HAZLEHURST, Georgia – There are benefits to going with a prototype – being on the cutting edge means helping to shape the technology as it is being developed. It also means having to know when the prototype just is not working, and it is time to abort.

Fram Renewable Fuels wanted a way to construct a new pellet mill in a modular fashion. Fram also wanted to find a way to utilize the heat value of the VOCs produced by wood fiber drying that were typically controlled by incineration in the available drying systems. So, Fram contracted with a reputable, highly capable equipment manufacturer to produce such a system. After several years of intense and dedicated work on the project, the facility decided the expected results could not be economically achieved.

It was the right move, Harold E. Arnold, who handles sales and marketing for Fram, says. “Not being able to be consistent and hit the goals we wanted to was the reason why we ultimately pulled back.”

After delving into the experimental process and trying to make it right, Fram was ready for a change that would bring the mill the consistency it craved. After gathering information, including visiting other industry sites around the U.S. South, Fram signed the order with TSI for a complete redo of the dryer island, including the furnace, dryer, WESP and RTO.

Bandit Industries has purchased The Trelan Co. from the Schumacher family. Bandit will continue to produce Trelan chippers and related products and market them as Trelan machines produced by Bandit. Bandit will also supply parts and service to Trelan customers…

USDA Forest Service Chief Randy Moore announced new funding and a redesigned strategy for the Four Forest Restoration Initiative (4FRI) during a visit with elected officials in Arizona in November. The agency is committing $54 million in fiscal year 2022 to accelerate implementing high-priority projects on 135,000…